If you are an electrician working with high-voltage equipment (anything rated more than 750 volts) then you should really understand high voltage grounding including the concept of equipotential grounding and how it differs from parallel grounding. I'll be using 3-phase high lines with a neutral as an example because it's easier to visualize, but once you've got the concept the same theory can be applied when working with high-voltage metal-enclosed switchgear as well.

Up until the early '70s, people in all industries were almost exclusively using parallel grounding as the main electrical safety grounding technique to "protect" the worker from dangerous shock hazards when working on high-voltage equipment. The trouble was, it wasn't working. Lineman and other high voltage workers were being killed during incidents where lines were accidentally re-energized or had induced voltages and currents from nearby energized conductors.

The first thing you need to understand is that personal protective grounds are used to maximize the current flow to the ground... the goal is to maintain the voltage level at the work location to a safe level until the upstream overcurrent device operates.

Imagine you were a bright shiny light bulb. What would happen to you if someone plugged in an industrial-sized table saw and turned it on? You would grow very dim, maybe even go out... it would only be for a second but hopefully, you get the point. You would have zero to no voltage drop across your body... or... I mean, your filament...

The ground is acting as a huge motor and when the line is accidentally re-energized someone at the work location is like the light bulb that fades. In theory.

In reality, the trouble with parallel grounding is that it didn't work. There would still end up being some voltage drop across the person's body at the worksite and this would cause a deadly shock. Looking at the personal protective grounding equipment, if the connections between grounding cables, phase conductors, and earth were not perfect (maybe because of a small amount of oxidization on the conductors) then holding the system voltage near zero was next to impossible. 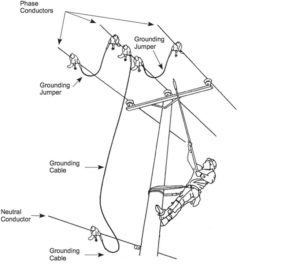 In the case of a lineman working on a wooden pole, the pole would act as a conductor to the ground. So effectively you had a set of parallel circuits to ground, one through the ground conductors and one through the worker and the pole. This lineman would be a light bulb that kept on shining.

So how does equipotential grounding solve this?

It's actually quite simple. Just make sure the ground conductors and (in this case) the pole are at the same potential. You do this by using what's called a ground cluster (for metal-enclosed switchgear you can use a grounding mat).

The ground cluster is simply a chain that wraps around the pole and is tightened with a wheel binder. You place the cluster just below the worker's feet and then attach it to the grounding conductor. 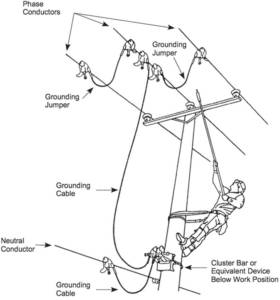 This effectively makes the worker a bird on a wire. If accidental re-energization were to occur there would be no difference in potential across the worker's body.

As long as the grounds were sized correctly and proper installation practices were followed, the overcurrent devices will trip and the effective grounding will ensure the worker will stay safe.

I hope you found this article useful and if you did please share it using the social media buttons at the bottom of the post! Also if you would like some help with your electrical safety program, feel free to contact me anytime.

Not Sure Which Electrical Training Course Best Fits Your Team?

Download our Training Guide to help find the course that will best suit your team. 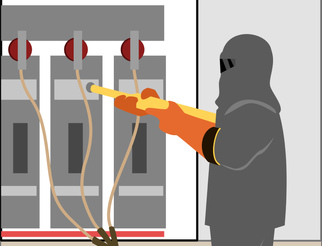 How to become a qualified electrical worker (2023) 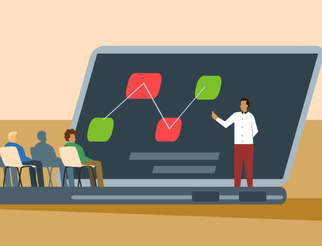